The History of Prosthetic Devices 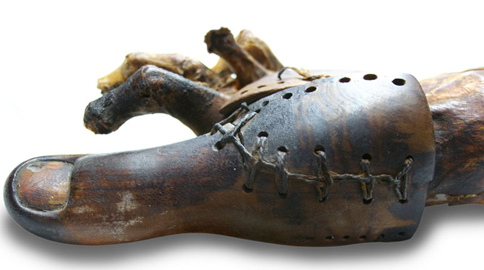 Today’s prosthetic devices are nothing short of extraordinary. With modern developments like carbon technology, your prosthesis is lighter and more functional than ever before! However, this wasn’t always the case. Limb loss isn’t a new thing, and neither are prosthetic devices -- so what did people do centuries ago? What kinds of prostheses did they wear? Let’s take a look!

From what we can tell, the earliest example of a prosthetic device was -- wait for it -- a toe! Specifically, it was a big toe, and it belonged to an Egyptian noblewoman between 950 and 710 BC.

It’s a bit surprising that the first prosthesis was something as seemingly insignificant as a big toe, and not something more substantial, like an arm -- but the thing about Egyptian culture back then was that they were very concerned about wearing their sandals. If you were going to wear traditional Egyptian thong sandals (and anybody who was anybody was wearing them, of course), then you needed your big toe!

For this woman, wearing a prosthetic toe was as much about function as it was about her identity as an Egyptian and a noblewoman. If she couldn’t wear her sandals, then she couldn’t be who she was supposed to be -- or so she must have thought.

The Most Famous Early Prosthesis

In the history of prosthetic limbs, the most famous Ancient Roman with a documented prosthesis was General Marcus Sergius.

Sergius lost his right hand in the second Punic War. He was given a prosthesis made from iron that allowed him to properly hold his shield and keep fighting. The loss of his hand occurred very early in his military career, but it didn’t stop him from escaping both times when he was later captured twice by Hannibal.

The Beginning of Modern Developments

It wasn’t until the early 16th century that Dr. Ambroise Paré made great progress in amputation surgery and prosthetic limbs. He was the very first person to develop a prosthetic hand with hinges and a leg with a locking knee joint.

There wasn’t much progress with prosthetic limbs between the 1500s and the 1800s, but there were significant advancements in amputation surgery in the mid-19th century that enabled doctors to shape the residual limb for better attachment of a prosthesis. The limbs themselves weren’t much improved from centuries before, but for people with limb loss, things were starting to go down the right path.

We value the lessons of the past, but we also know that technological progress is vital! At BioTech, we work hard to make sure your prosthesis fits and functions exactly as it should. We won’t give you an iron hand like Sergius, but we will give you a new limb that allows you to live a full, rich life! Contact us today for more information!