From a Chinese Orphanage to an American Home: Jonathan Hixon’s Story 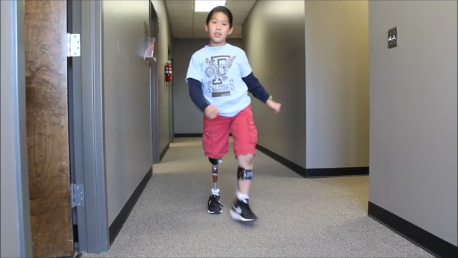 In China, a country with a population of over 1.5 billion people, there are roughly one million orphans. No one is really sure as to the exact number. All we know is that there are many, and their needs are massive - beyond our imagination. It’s a tragic tale, full of sorrow and despair, a story of abandonment and neglect. What’s worse is that many of these orphans have special needs but lack the resources to be properly cared for.

In the face of such an overwhelmingly large tragedy, how can one person possibly make a difference? It seems impossible.

Over the years, the couple has adopted six children from China - two boys and four girls. Their names are Jonathan, Josiah, Ruthie, Sarah Kate, Miriam, and Naomi. All of them have some form of special needs, ranging from moderate to severe. And these six children are in addition to the eight biological children that the Hixons have.

Six children were pulled from wretchedness in a foreign country and placed into a safe, secure, loving home here in America - all because one couple decided that they could and would make a difference.

Rebecca points to her faith as the catalyst for what her family has been able to do. “Several years ago, we were doing missions in Nicaragua and the Lord just opened our eyes to the orphan crisis around the world,” says Rebecca. “The Lord is the one who opened our hearts to this. He saved us and adopted us into His family. That just opened our eyes that we could adopt children into our lives and open our arms and our hearts and our homes to these children.”

One of her blessings is one of her oldest adopted children, ten-year-old Jonathan. When they first saw Jonathan, he had a deformed right leg that wouldn’t allow him to walk, only crawl. He also had a mild case of cerebral palsy, and he’s missing several fingers on his left hand, too. But when some people would unfortunately see a damaged child, the Hixons felt compassion well up in their hearts, and saw a precious child of God in need of love and care.

After his adoption, Jonathan had his deformed right leg amputated by doctors at Children’s Hospital. Shortly after, Jonathan was connected with BioTech to receive his first prosthesis. Over the years Jonathan has been with us, we’ve had to modify and adapt his prosthetic device to fit the needs of a growing boy - and it’s been a joy along the way to see him growing up before our eyes, getting healthier and stronger with each visit.

Jonathan puts his leg to good use, too; he loves playing outside with his brothers and sisters. He lives as normal of a life as any other child, something that the Hixons were determined to offer him. He plays video games, loves crossword puzzles, likes to read, and enjoys watching movies.

And although he has struggles, every time we see him in our office, Jonathan always has a laugh and a smile waiting for us. The small gestures are some of the things that make what we do a true blessing, and that is exactly what Jonathan has been to us and his family.

“BioTech has been outstanding and has helped Jonathan from the very beginning,” says Rebecca. “We’re so thankful for the work BioTech does. Their customer service is impeccable and their work is excellent.”

We’re thankful for the opportunity to help Jonathan, but we’re also thankful for people like Rebecca and Eric Hixon, who have such an open heart for children. Because of them, Jonathan and his adopted brothers and sisters have gone from a sad, tragic situation to one filled with hope and love.

Looking for more information on BioTech and our services? Contact us today.